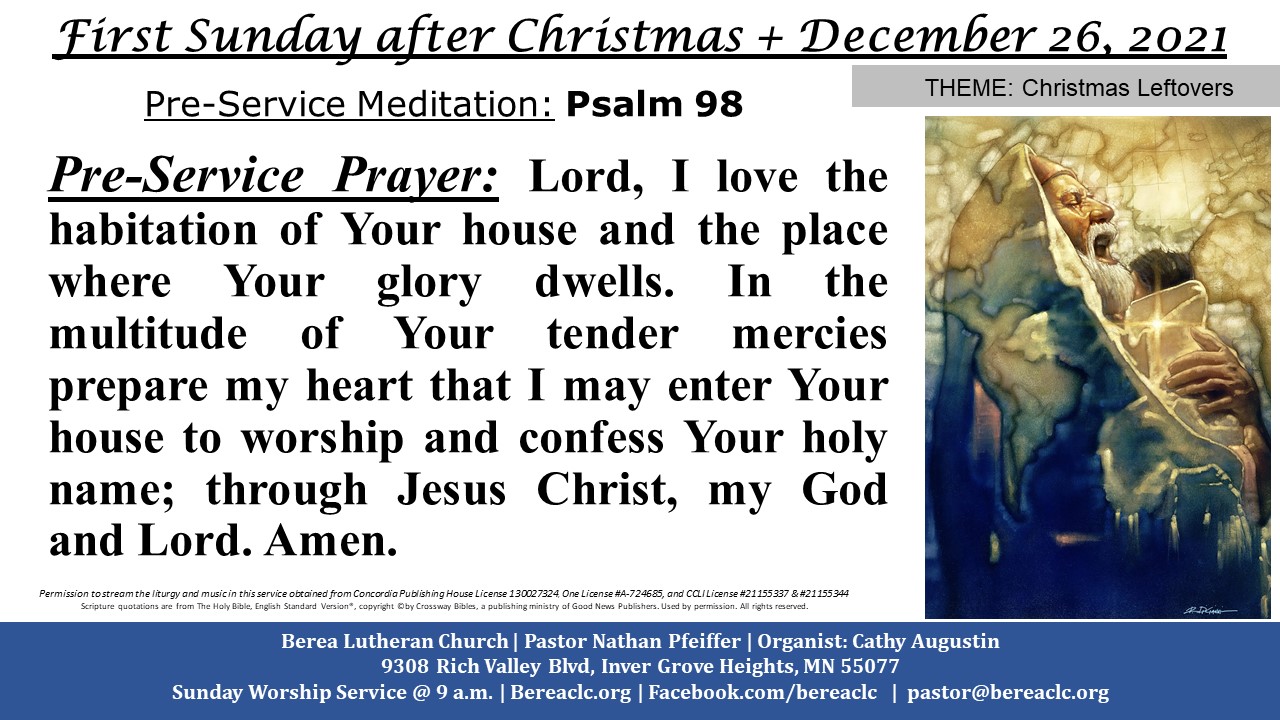 THE SERMON:  WE FOCUS ON GOD’S WORD

Luke 2:22-40        22When the time came for their purification according to the Law of Moses, [Mary and Joseph] brought [Jesus] up to Jerusalem to present him to the Lord 23(as it is written in the Law of the Lord, “Every male who first opens the womb shall be called holy to the Lord”) 24and to offer a sacrifice according to what is said in the Law of the Lord, “a pair of turtledoves, or two young pigeons.” 25Now there was a man in Jerusalem, whose name was Simeon, and this man was righteous and devout, waiting for the consolation of Israel, and the Holy Spirit was upon him. 26And it had been revealed to him by the Holy Spirit that he would not see death before he had seen the Lord’s Christ. 27And he came in the Spirit into the temple, and when the parents brought in the child Jesus, to do for him according to the custom of the Law, 28he took him up in his arms and blessed God and said,

29“Lord, now you are letting your servant depart in peace,
according to your word;
30for my eyes have seen your salvation
31that you have prepared in the presence of all peoples,
32a light for revelation to the Gentiles,
and for glory to your people Israel.”

33And his father and his mother marveled at what was said about him. 34And Simeon blessed them and said to Mary his mother, “Behold, this child is appointed for the fall and rising of many in Israel, and for a sign that is opposed 35(and a sword will pierce through your own soul also), so that thoughts from many hearts may be revealed.”

36And there was a prophetess, Anna, the daughter of Phanuel, of the tribe of Asher. She was advanced in years, having lived with her husband seven years from when she was a virgin, 37and then as a widow until she was eighty-four. She did not depart from the temple, worshiping with fasting and prayer night and day. 38And coming up at that very hour she began to give thanks to God and to speak of him to all who were waiting for the redemption of Jerusalem.

39And when they had performed everything according to the Law of the Lord, they returned into Galilee, to their own town of Nazareth. 40And the child grew and became strong, filled with wisdom. And the favor of God was upon him.